8.18.18 Praise & Prayer Prompt: Lessons From the Genealogy of Jesus 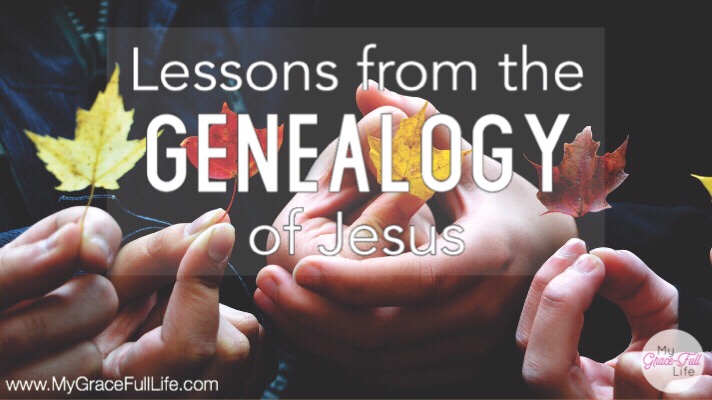 PRAISE & PRAYER PROMPT ••• When it comes to reading the Bible, I know few who relish reading the genealogies.
I get it.
Long lists of names, most of which are crazy-hard to pronounce.
If you’re like me, at some point you’ve wondered why those long lists of family records are important to Scripture.
They actually do have a purpose and though they are challenging to get through, they ultimately help point us to our connection to Jesus.
It’s actually kind of fascinating if you get past the list of names.
In Matthew 1:1-17, we read the genealogy of Jesus.
I’m just going to hit the major players here: Abraham, Isaac, Jacob, Judah, Tamar, Rahab, Boaz, Ruth, Jesse, David, Bathsheba, and Solomon.
You’ve undoubtedly heard stories of some or most of these people, but for a quick recap and to add to the genealogy that’s not listed in Matthew…
Abraham was a descendant on Noah (Noah was his 8th great-grandfather)…
Abraham and his wife, Sarah, tried to hurry up God’s promise of a son through Sarah’s servant (Hagar/Ishmael), but in God’s timing, they eventually had Isaac.
From Isaac, came Jacob who tricked his older brother out of his birthright, and with four different women, he had 12 sons who were the foundation for the 12 Tribes of Israel.
Judah was one of those sons and he had a daughter-in-law, Tamar, who married one son…
That guy died without any children, so Judah had his other son marry her…
He died too, and so Judah sent Tamar away with the promise that she could marry his third son when he was old enough.
But he reneged on the promise, so Tamar was a childless widow — a really bad position to be in back in those days.
So when Tamar heard Judah was coming to town, she dressed as a prostitute, slept with her father-in-law, and she and Judah became parents to twin boys.
One of those twins was named Perez, and a few generations later, Rahab was born.
Rahab was the prostitute who helped Joshua out in Jericho.
Rahab’s son was Boaz, the awesome good-guy of the Old Testament who married Ruth.
But Ruth was a Moabite, making her a descendant of Lot’s incestuous relationship with his daughter.
Nevertheless, Ruth and Boaz had a son, Obed, who would have Jesse and ultimately become David’s grandfather.
David was the youngest of Jesse’s eight sons and the one Jesse deemed to be the least likely candidate when Samuel showed up looking for the next king of Israel.
David was known as “a man after God’s own heart), yet he wasn’t a squeaky clean guy.
He lusted after another man’s wife (Bathsheba), got her pregnant, then had her husband killed.
He was a murderer and adulterer, yet when he repented, he repented with all his heart.
Then there was Solomon, the second son of David and Bathsheba (she was David’s wife by this point) and he was the son who inherited the throne.
He asked God for wisdom and as a result, enjoyed extraordinary wealth and blessings.
But Solomon allowed himself to be tempted by women and false gods, thus creating a big ‘ole mess in which the kingdom was split apart.
Whew!
Talk about some family drama, right?!
Where’s Dr. Phil for this one??
Yet, Jesus was a descendant of these men and women…
These sinners.
He was related to a host of people who broke every one of the Ten Commandments.
So why is this included in Scripture?
Because no matter what our pasts are, Jesus came to free us, redeem us, and He loves us no matter what.
I read a quote the other week that said, “You will never look into the eyes of a person that God does not love.”
Isn’t that beautiful?
That truth is confirmed in John 3:16-17, which says, “For this is how God loved the world: He gave his one and only Son, so that everyone who believes in him will not perish but have eternal life. God sent his Son into the world not to judge the world, but to save the world through him.”
Our family lineage is a part of a large tapestry that showcases God’s love.
It may not look the way we think it should look, but if we take a step back, and look at it from a different perspective, trusting in God’s infinite wisdom, we can see threads of hope.
Love.
Redemption.
Grace.
Mercy.
Jesus’ own genealogy is an incredible example of His ability to bring beauty from ashes (Isaiah 61:3).
Today, as you pray, remember you’re not the only one with a past.
The Bible tells story after story of those who have tried to rush God, do their own thing, seek their own agenda, hurt others, told lies, broken promises, and yet, God’s faithfulness endured.
His grace covers it all to those who seek forgiveness.
Thank God for His goodness.
Thank Jesus for His willingness to not only be connected to us despite our sins, but to die to save us from them.
SCRIPTURE REFERENCES: