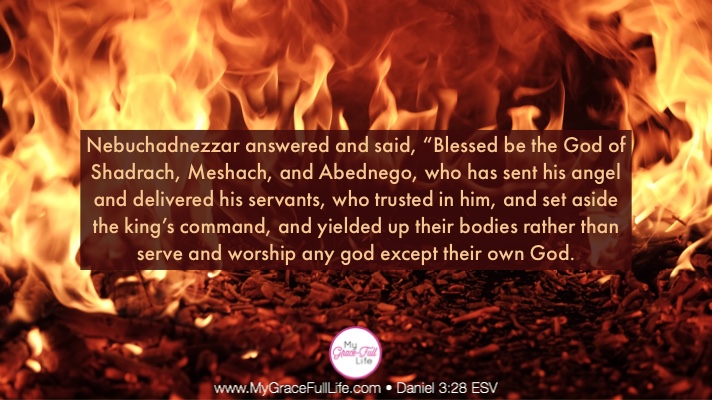 PRAISE & PRAYER PROMPT ••• For years, my husband and I have grown jalapeños.
I don’t eat them often because they are too hot for me.
My husband, on the other hand, can eat them like candy straight from the plant.
A few years ago, I developed a homemade hot sauce that I make each summer.
After church today, I’ll be making bottles of what we call “Heidel Hitze” (“hitze” is German for “heat”).
But this year, in addition to jalapeños in our garden, Wayne is growing ghost peppers so I’ll be making ghost pepper sauce next month.
They aren’t quite ready and frankly, neither am I.
Jalapeños will burn my eyes if not handled properly, and handling ghost peppers is a daunting notion.
I’ve ordered culinary gloves and plan to wear goggles and a face mask whenever I start that batch.
After all, if a jalapeño has threatened to push me out of my own kitchen, I am not about to go unarmed in the face of a ghost pepper that is up to 400 times hotter than a jalapeño.
We have to be prepared in life.
Sometimes we deal with a little heat, and sometimes—a lot.
It’s our faith that determines how well we handle it.
Daniel 3:8-30 tells the story of Shadrach, Meshach, and Abednego and the fiery furnace.
When commanded to bow before the Babylonian king Nebuchadnezzar, these three refused, knowing the punishment for their defiance would be death in the fiery furnace.
Verse 17 of the ESV quotes their response, “If this be so, our God whom we serve is able to deliver us from the burning fiery furnace, and he will deliver us out of your hand, O king.”
In fury, and a serious case of overkill, Nebuchadnezzar demanded the furnace to be heated seven times the normal temperature.
The Bible says that the fire was so hot when the door was opened to cast Shadrach, Meshach, and Abednego into the furnace, the flames overtook and killed the executioners (v. 22).
Yet—Shadrach, Meshach, and Abednego did not die.
In fact, Nebuchadnezzar recognized that a fourth man was in the fire—an angel to protect God’s loyal followers.
Scripture tells us that when Shadrach, Meshach, and Abednego emerged from the fire, “The hair of their heads was not singed, their cloaks were not harmed, and no smell of fire had come upon them” (v. 27b).
The faith of Shadrach, Meshach, and Abednego were too big for the furnace.
It was bigger than a violent king with a serious temper.
And it was a fireproof faith that demonstrated God’s almighty power in the face of certain death, no matter how high the heat of the situation.
We tell the story of Shadrach, Meshach, and Abednego to children because it’s a larger than life adventure-style story that ranks up there with David and Goliath.
But as adults, how often do we get past the core details and really examine the intensity of the story?
Do you have a fireproof faith?
Do you trust God no matter how high the heat of your situation?
Do you trust Him even when His rescue doesn’t look as dramatic as Shadrach, Meshach, and Abednego’s?
Does your faith willingly accept whatever outcome God has planned for your life?
These Bible stories are real-life examples that we can look to and learn from.
Are we willing to learn from the men and women who stood firmly rooted to rock-solid, unshakeable faith that could withstand any force that came against it?
Today, as you pray, thank God for the faith of those like Shadrach, Meshach, and Abednego who continue to show us that His power cannot be measured or contained.
Ask the Holy Spirit to strengthen your faith so that no matter how high the heat, you can withstand it through your belief in Jesus.