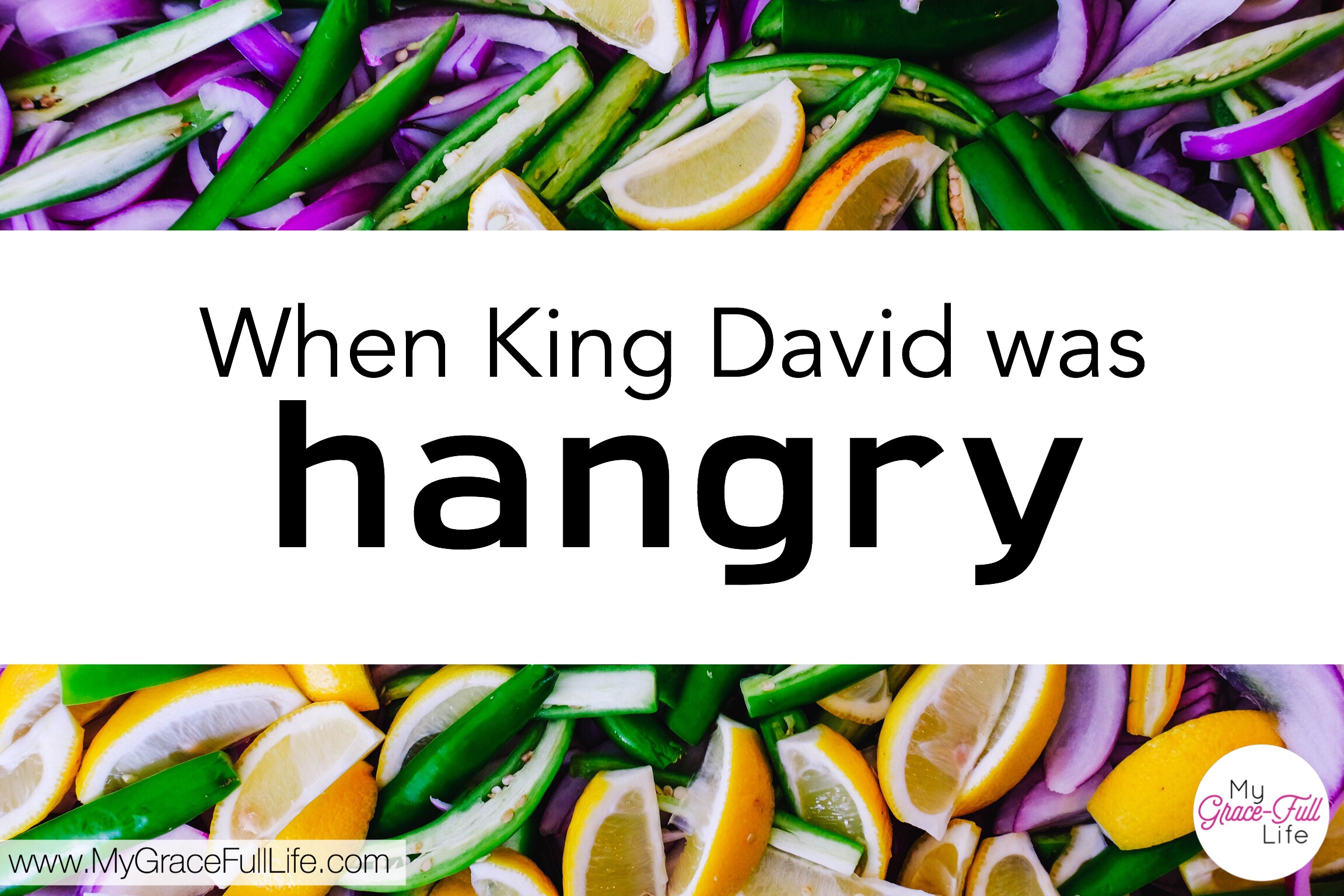 PRAISE & PRAYER PROMPT ••• Did you know there’s a record of hangriness in the Bible?
A couple, actually…
Just so we’re on the same page, “hangry” is an irrational response or overreaction to a situation that is largely contributed to hunger.
The first instance of hangriness would be Esau’s story, who arrived home so hungry that he traded his birthright for a bowl of stew (Genesis 25:29-34).
A crazy-impulsive move born out of a hangry moment.
I sure hope that stew was good…
Today, let’s look at David’s hangry experience.
In 1 Samuel 25, David and his army were hungry and it was sheep shearing time, meaning those who were shearing would enjoy a feast of fresh meat.
David sent some messengers to a local man named Nabal who would be sheering and have a plentiful supply for sharing.
In verses 4-8, David reminded Nabal that he and his army had protected Nabal’s herds and assets and had made sure Nabal didn’t lose anything.
So he asked Nabal to extend kindness and share.
Nabal’s response was full of derision which boiled down to a great big “no.”
When David heard of Nabal’s answer, he said “Get your swords!” and recruited 400 men to go teach Nabal a lesson (1 Samuel 25:13).
Overreaction??
400 men to storm down on a guy unwilling to share?
I’m all for calling the guy a selfish jerk, but the 400 men with swords seems a bit much.
But when you’re hungry, you’re hungry.
Thankfully, Nabal had a sensible wife.
Abigail was married to an unreasonable, selfish man, so there’s little doubt she had experience in calming over-the-top situations.
When a servant told her what was going on, she got ahead of the situation and quickly packed “200 loaves of bread, two wineskins full of wine, five sheep that had been slaughtered, nearly a bushel of roasted grain, 100 clusters of raisins, and 200 fig cakes.” (1 Samuel 25:18).
(Apparently, her pantry was way bigger than mine.)
On her way to meet with David, David was still grumbling, “A lot of good it did to help this fellow. We protected his flocks in the wilderness, and nothing he owned was lost or stolen. But he has repaid me evil for good.”
But when she met David, Abigail didn’t try to argue with him.
Verse 24 tells us “She fell at his feet and said, ‘I accept all blame in this matter, my lord. Please listen to what I have to say.’”
She took ownership.
Why?
Her husband was the one who wouldn’t share and who insulted David.
Why would she need to take the blame?
Abigail showed tremendous character and there’s a great lesson from her.
Sometimes, it’s better to extend humility rather than try to get into a debate.
She could have said to David, “I get that you’re hungry, but you’re being as unreasonable as my husband!”
I don’t think that would have yielded the same positive outcome.
David knew she wasn’t responsible, but she caught his attention when she owned the situation.
Maybe some in our society would call her a doormat, or weak… but I think she saw a situation that was spiraling out of control and did what she needed to do to diffuse it.
If David and 400 men had gone on to attack Nabal, there would have been a lot of bloodshed.
David would have had murder on his hands.
Abigail, through her humility, caught David’s attention and was able to gently remind him in verses 30-31, “‘When the Lord has done all he promised and has made you leader of Israel, don’t let this be a blemish on your record. Then your conscience won’t have to bear the staggering burden of needless bloodshed and vengeance. And when the Lord has done these great things for you, please remember me, your servant!’”
Her gift of food, humility, and wise words calmed a bad situation and turned it around.
As for David, her actions interrupted his train of thought, and he stopped letting his stomach dictate his actions.
Nabal did die about ten days later.
And David recognized a great woman when he saw her, and married Abigail himself.
How is this story relatable to you?
Do you ever find yourself with an unreasonable reaction to something?
Or get mad at a strangers words to the point that you overreact?
What is your big takeaway from Abigail’s response to the situation?
Today, as you pray, ask the Holy Spirit to show you how to remain calm… to not let temporary emotions cause you to make permanent choices.
Ask Him to help you listen to wise counsel from those like Abigail.
And when you see a situation beginning to boil, ask Him to let you be a calming presence like Abigail.